Back to: Ensemble Quartz

Animals have been a source of inspiration for authors and composers through all time. Durey and Poulenc integrate GA's poetry into their musical world, while Gaston Compère acts both as a poet and a composer. 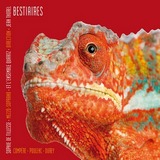 Audio clip: Adobe Flash Player (version 9 or above) is required to play this audio clip. Download the latest version here. You also need to have JavaScript enabled in your browser.

Gaston Compère( 1924- 2008) wrote his 'Grand Bestiary' after his own collection of 47 poems dated 1949 at the request of Sophie de Tillesse. An author of such a stature was to turn his own texts into music, who dedicated this composition to Sophie de Tillesse and the Quartz Ensemble.

The 'Grand Bestiary' was premiered at the Boondael Chapel on 14 December 2004, with the composer present.

Following its premiere, the Quartz Ensemble and Sophie de Tillesse decided to create this CD and this first recording of this piece certainly does not lack originality.
In the same poetic vein, we offer two 'Bestiaries'; one by Francis Poulenc ( 1899-1963 ), the other by Louis Durey ( 1888-1979 ) on texts by Guillaume Apollinaire (1880 -1918 ). Like Compère, Apollinaire goes beyond the mere description of animals to reach the essence of each animal as a symbolic, poetic metaphor of the human soul.

Incidentally, Poulenc dedicated his Bestiaire to his close friend Durey with whom he shares a similar musical approach. Both belonged to the 'Groupe des Six' including Germaine Tailleferre, Darius Milhaud, Arthur Honegger and Georges Auric.

Conductor Jean Thorel was chosen for his artistic and human qualities and for his long experience in contemporary music. He is the chief conductor of the City Chamber Orchestra of Hong kong and a regular collaborator of the Quartz Ensemble.